Our system, called Dactyl, is trained entirely in simulation and transfers its knowledge to reality, adapting to real-world physics using techniques we've been working on for the past year. Dactyl learns from scratch using the same general-purpose reinforcement learning algorithm and code as OpenAI Five. Our results show that it's possible to train agents in simulation and have them solve real-world tasks, without physically-accurate modeling of the world.

Dactyl is a system for manipulating objects using a Shadow Dexterous Hand. We place an object such as a block or a prism in the palm of the hand and ask Dactyl to reposition it into a different orientation; for example, rotating the block to put a new face on top. The network observes only the coordinates of the fingertips and the images from three regular RGB cameras.

Although the first humanoid hands were developed decades ago, using them to manipulate objects effectively has been a long-standing challenge in robotic control. Unlike other problems such as locomotion, progress on dextrous manipulation using traditional robotics approaches has been slow, and current techniques remain limited in their ability to manipulate objects in the real world.

Reorienting an object in the hand requires the following problems to be solved:

Dactyl learns to solve the object reorientation task entirely in simulation without any human input. After this training phase, the learned policy works on the real robot without any fine-tuning.

Learning methods for robotic manipulation face a dilemma. Simulated robots can easily provide enough data to train complex policies, but most manipulation problems can’t be modeled accurately enough for those policies to transfer to real robots. Even modeling what happens when two objects touch—the most basic problem in manipulation—is an active area of research with no widely accepted solution. Training directly on physical robots allows the policy to learn from real-world physics, but today’s algorithms would require years of experience to solve a problem like object reorientation.

Our approach, domain randomization, learns in a simulation which is designed to provide a variety of experiences rather than maximizing realism. This gives us the best of both approaches: by learning in simulation, we can gather more experience quickly by scaling up, and by de-emphasizing realism, we can tackle problems that simulators can only model approximately.

We built a simulated version of our robotics setup using the MuJoCo physics engine. This simulation is only a coarse approximation of the real robot:

The simulation can be made more realistic by calibrating its parameters to match robot behavior, but many of these effects simply cannot be modeled accurately in current simulators.

By building simulations that support transfer, we have reduced the problem of controlling a robot in the real world to accomplishing a task in simulation, which is a problem well-suited for reinforcement learning. While the task of manipulating an object in a simulated hand is already somewhat difficult, learning to do so across all combinations of randomized physical parameters is substantially more difficult.

To generalize across environments, it is helpful for the policy to be able to take different actions in environments with different dynamics. Because most dynamics parameters cannot be inferred from a single observation, we used an LSTM—a type of neural network with memory—to make it possible for the network to learn about the dynamics of the environment. The LSTM achieved about twice as many rotations in simulation as a policy without memory.

Dactyl learns using Rapid, the massively scaled implementation of Proximal Policy Optimization developed to allow OpenAI Five to solve Dota 2. We use a different model architecture, environment, and hyperparameters than OpenAI Five does, but we use the same algorithms and training code. Rapid used 6144 CPU cores and 8 GPUs to train our policy, collecting about one hundred years of experience in 50 hours.

For development and testing, we validated our control policy against objects with embedded motion tracking sensors to isolate the performance of our control and vision networks.

Dactyl was designed to be able to manipulate arbitrary objects, not just those that have been specially modified to support tracking. Therefore, Dactyl uses regular RGB camera images to estimate the position and orientation of the object.

We train a pose estimator using a convolutional neural network. The neural network takes the video streams from three cameras positioned around the robot hand and outputs the estimated position and orientation of the object. We use multiple cameras to resolve ambiguities and occlusion. We again use domain randomization to train this network only in simulation using the Unity game development platform, which can model a wider variety of visual phenomena than Mujoco.

By combining these two independent networks, the control network that reorients the object given its pose and the vision network that maps images from cameras to the object’s pose, Dactyl can manipulate an object by seeing it.

Example training images used for learning to estimate the pose of the block.

When deploying our system, we noticed that Dactyl uses a rich set of in-hand dexterous manipulation strategies to solve the task. These strategies are commonly used by humans as well. However, we do not teach them to our system explicitly; all behaviors are discovered autonomously. 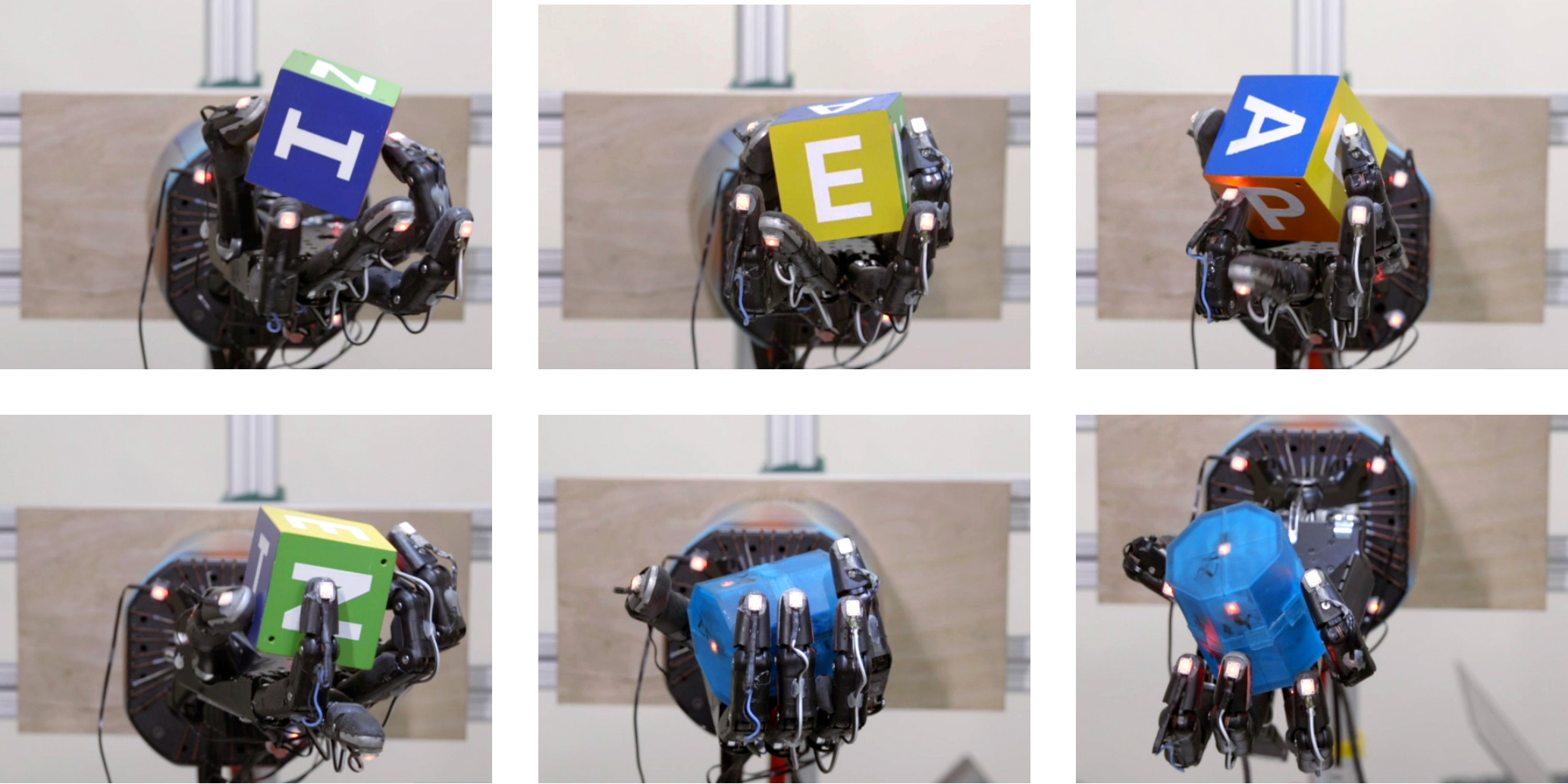 We observed that for precision grasps, such as the Tip Pinch grasp, Dactyl uses the thumb and little finger. Humans tend to use the thumb and either the index or middle finger instead. However, the robot hand's little finger is more flexible due to an extra degree of freedom, which may explain why Dactyl prefers it. This means that Dactyl can rediscover grasps found in humans, but adapt them to better fit the limitations and abilities of its own body.

We tested how many rotations Dactyl could achieve before it dropped the object, timed out, or reached 50 successes. Our policies trained purely in simulation were able to successfully manipulate objects in the real world.

For the task of block manipulation, policies trained with randomization could achieve many more rotations than those trained without randomization, as can be seen in the results below. Also, using the control network with pose estimated from vision performs nearly as well as reading the pose directly from motion tracking sensors.

The vast majority of training time is spent making the policy robust to different physical dynamics. Learning to rotate an object in simulation without randomizations requires about 3 years of simulated experience, while achieving similar performance in a fully randomized simulation requires about 100 years of experience.

Learning progress with and without randomizations over years of simulated experience.

What didn't pan out

We also found to our surprise that a number of commonly employed techniques did not improve our results.

This project completes a full cycle of AI development that OpenAI has been pursuing for the past two years: we've developed a new learning algorithm, scaled it massively to solve hard simulated tasks, and then applied the resulting system to the real world. Repeating this cycle at increasing scale is the primary route we are pursuing to increase the capabilities of today's AI systems towards safe artificial general intelligence. If you'd like to be part of what comes next, we're hiring!